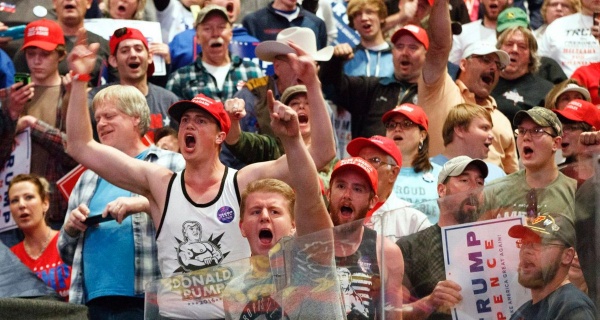 Opinion: If the president wants to 'take care of' the hate in our country, he needs to start with himself.

Before heading back to the White House Sunday on a weekend in which there were two mass shootings leaving 29 dead and scores injured, President Donald Trump said, “Hate has no place in our country, and we're going to take care of it.”

Because taking care of it begins with … you.

You can begin by not demonizing immigrants, not referring to human beings as animals, not speaking about an “invasion,” not speaking in racist and xenophobic terms about members of Congress.

Then you could quit cuddling up with the gun lobby, particularly the National Rifle Association, and work with Congress on common sense legislation that would include universal background checks and bans on assault weapons and extended magazines.

Finally, you could stop pretending that white nationalist terrorism does not exist and start taking action to thwart it.

According to an analysis of FBI records by The New York Times, white extremists have carried out at least eight active-shooter attacks in the United States since 2017.

A fact that is celebrated online by pathetic wannabes.

The "manifesto" linked to the 21-year-old El Paso shooter says, among other things, “My opinions on automation, immigration, and the rest predate Trump and his campaign for president.”

Yeah, right. Like when he was in his teens?

Do not excuse the rhetoric, Mr. President, even your own. Particularly your own.

The manifesto speaks of an “invasion” of Hispanics. You use that term all the time. It even filters on down to the places like the Arizona Republican Party, as pointed out by journalist Nick Martin.

The manifesto speaks of “America rotting from the inside out” and laments what the writer calls the “last generation of white babies.”

It’s not that such bigoted ideas haven’t existed in America before today. They’ve always existed. But when the president himself speaks in equally ugly terms it emboldens those on the fringe.

So, too, does avoidance of subjects like racism and white nationalist terrorism, neither of which you mentioned as you were leaving your New Jersey resort to head back to Washington.

Not saying the words “racism” and “white nationalist terrorism” – out loud – doesn’t mean they don’t exist.

And if “hate as no place in our country,” as you said, then neither does hate-mongering.

And if you are going to “take care of it,” then do so.