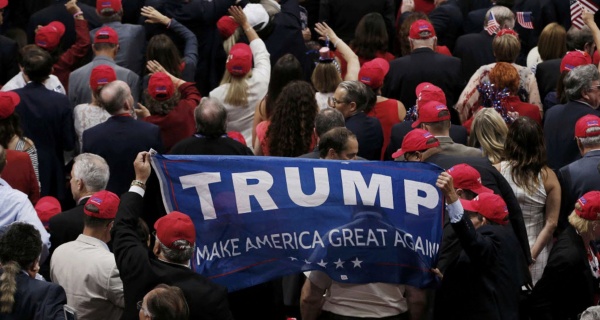 One thing I’m wondering: Why aren’t Trump’s supporters embarrassed by him? When he lies; when he misspeaks; when he makes a fool of himself and denigrates women. When he says he is OK with letting asylum seekers live in squalid detention camps? Why do they forgive all his indiscretions?

I have yet to find a plausible answer. I know they aren’t all stupid and while many of his supporters are as racist, sexist and homophobic as he is they aren’t all that way. I thought it might be people who had never been far from home. Then recently I was on a nine-day Baltic cruise and during a tour of Stockholm one of the Americans on our tour bus defended him by saying he was the most honest president ever. I wanted to laugh but it wasn’t funny. This was a man traveling the world with his wife. He obviously had some money and was educated and it was perplexing. I asked him if he ever watched a Trump video when Trump said one thing and then denied saying it. He continued to insist Trump was not a liar.

During the 2016 campaign, Hillary Clinton said: “You can take Trump supporters and put them in two big baskets. There are what I would call the deplorables—you know, the racists and the haters, and the people who are drawn because they think somehow he’s going to restore an America that no longer exists.” Today we know she was correct. Because what other explanation is there for those who seem to excuse his presidency seemingly with their eyes and ears closed to what he is doing and saying?

Yet they are all not uneducated. Gregory T. Angelo, former president of the Log Cabin Republicans, said he continues to believe Trump is the most pro-LGBT president even after Trump and his administration “announced a ban on transgender people in the military; fired the entire presidential AIDS commission; decided not to collect data on LGBTQ people in the census; pulled questions about LGBTQ seniors in a health survey on the elderly; supported employer discrimination against LGBTQ people; backed allowing discrimination in public accommodations against LGBTQ people; appointed anti-LGBTQ judges to federal courts; and said he would stop investigating discrimination against trans students in bathrooms, among many other hostile actions.” How does one pretend all this didn’t happen? Is Angelo deplorable? I don’t know but he is certainly something, maybe it’s despicable, and certainly not rational. He recently joined Trump in opposing the Equality Act, lobbying against it.

In the coming months as we pick a Democratic candidate to run against the disgusting pig currently occupying the Oval Office some Democrats will debate who can get Republicans to join Democrats in voting him out. That is a waste of time. The reality is we don’t need those voters to get rid of him if Democrats and independent-leaning Democrats vote. As of October 2017, polling found “31% of Americans identified as Democrat, 24% identified as Republican, and 42% as Independent.” When Independents are asked, “Do you lean more to the Democratic Party or the Republican Party polling showed “46% are either Democrats or Democratic leaners and 39% are either Republicans or Republican leaners.” In the few states Democrats felt they should have won and lost by a total of 80,000 votes costing Clinton the Electoral College, Democrats took back the top three statewide positions in Wisconsin; won the governorship in Michigan; and took congressional seats and state legislative seats in Pennsylvania in 2018. It is about getting Democratic voters out and appealing to Democratic-leaning independents and getting them out.

We need a Democratic candidate focused on kitchen table issues who can speak to voters and look to their future. These are voters disturbed about his handling of immigrants, separating children from parents and putting children in cages.

We Democrats have to do the work of making people believe we will help them get a good education for their children and a college education they can afford. We need to address bringing down the price of prescription drugs and ensure coverage for pre-existing conditions. We must convince them we can keep us out of war; raise taxes on the wealthy and bring down taxes on the middle class. They are not expecting miracles. That is why what Nancy Pelosi and the Democratic caucus in the House are now doing is so important. They are actually passing legislation that will make up a platform our candidate can run on and win on.