Trump's Admiration For Dictators Is Undeniable 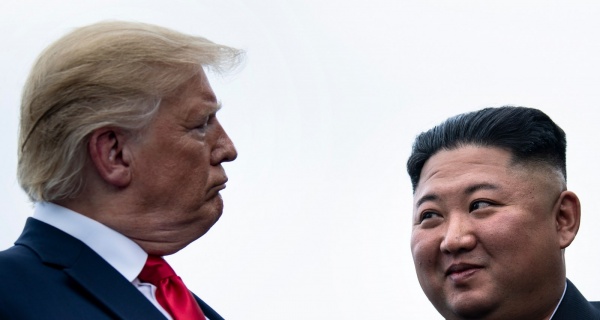 To the editor: Even an extreme right-wing Republican ought to question President Trump’s statement that his brief visit with Kim Jong Un in North Korea was “legendary.” It was historic, maybe, but for the wrong reasons.

Kissing up to a murderous dictator does not a legend make.

By now, every American should know that our president looks up to the despots of the world. It’s not just his friends from Russia, Saudi Arabia and North Korea — he has also displayed admiration for other, lesser-known illiberal leaders.

Our country is being constantly embarrassed while Trump and his family are in it to get as much of whatever is available while the getting is good. Does anyone in his or her right mind really want him around for another four years?

To the editor: The leaders of South Korea, China, Japan and Australia have all praised Trump for his progress in reducing tensions on the Korean peninsula and in the region (not to mention getting prisoners released and soldiers’ remains returned) and are very pleased with his recent meeting with Kim Jong Un in North Korea.

But, many of the “experts” quoted by the L.A. Times disagree. Apparently, they know more than the regional leaders who have been dealing with North Korean threat for decades.

To the editor: How much did the United States gain from Trump’s all-smiles photo op with Kim on North Korea’s bloodstained soil?

Zero, which coincidentally is Kim’s level of interest in getting rid of his nuclear weapons.

To the editor: Regarding Trump’s belief that his visit to North Korea was “legendary,” I’ll paraphrase the president’s tweet in response to the U.S. women soccer team co-captains emphatic statement that she will not go to the White House: First win, then talk.