The Trump Administration Is Considering A Devastating Attack On The Poor 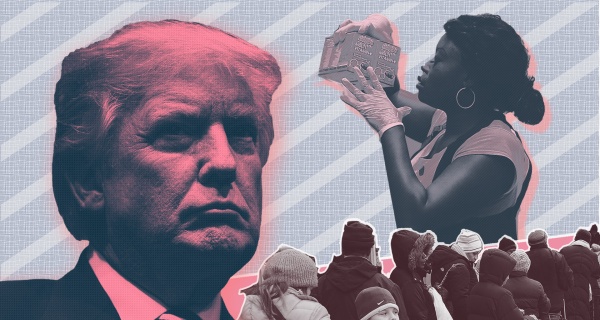 The Trump administration is considering a change to the nation's poverty measure that would ultimately cut vital healthcare and food assistance for millions of low-income people who need it.

Under the proposal, the federal government would calculate annual adjustments to the federal poverty line using an alternative, lower measure of inflation measure rather than the traditional measure, the consumer price index, CPI. Such a technical change may seem harmless.

But, in fact, of all the administration's actions harming low-income families, this is one of the most sweeping.

The proposal is one more piece of an effort the administration has been quite clear about: using its administrative authorities to try to achieve cuts to healthcare, nutrition, and other basic assistance programs that have so far been rejected by Congress.

If implemented, the change would not only lower the Census poverty thresholds, which determine who gets counted as poor, but it would also lower the Department of Health and Human Services poverty guidelines — the basis for eligibility standards for more than a dozen federal healthcare and basic assistance programs.

For example, hundreds of thousands of low-income seniors and people with disabilities would have to pay higher premiums for drug coverage and pay more out of pocket for prescription drugs because of cuts to Medicare's Part D Low-Income Subsidy Program. Over 150,000 low-income seniors and people with disabilities would lose help paying for their Medicare premiums. And more than 300,000 children would lose comprehensive coverage through Medicaid or the Children's Health Insurance Program, as would some pregnant women.

The proposal would also fuel large cuts to federal food assistance, which helps tens of millions of low-income people afford a nutritionally adequate diet. Nearly 200,000 people, mostly in working households, would lose SNAP benefits altogether. In addition, more than 100,000 school-age children would lose their eligibility for free or reduced-price school meals and about 40,000 infants and young children would lose benefits that provide healthy food, nutrition counseling, and breastfeeding support.

The administration claims the proposal is aimed at making the poverty line more accurate; but in reality there's evidence that the alternative inflation measure may be a less accurate measure for families with low incomes.

What's more, the high rate of hardship among families just above that poverty line suggests that, as it's now calculated, the poverty line is already too low. Under the proposal, the struggles of poor and near-poor families would only grow.

In all, the change would ultimately leave a staggering number of low-income Americans without access to essential services. It's one piece of the Trump administration's broader effort to curtail assistance for the most vulnerable people.

Since the start of this calendar year, that agenda has included cutting the Affordable Care Act's premium tax credits for more than 7 million people, continuing to invite restrictive Medicaid waivers even (after two such waivers were rejected in court), and proposing a rule that restricts states' ability to provide SNAP benefits to adults without children at home who are struggling to find jobs in high-unemployment areas.

If made final, this proposal would be yet another that would make it harder for struggling families to see a doctor, obtain medications they need, or put food on the table each night.