Mitch McConnell Must Join Trump Out The Door 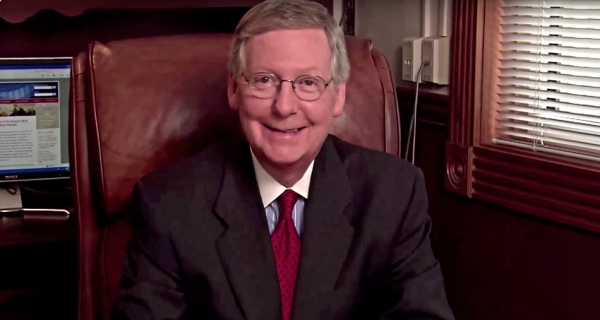 So this is how liberty dies — with a hideous, utterly shameless smirk on the face of arguably the most cynical political leader in American history, as the warriors in his political tribe cackle with laughter.

The end came Tuesday in about the most out-of-the-way venue you could imagine: a chamber of commerce luncheon in Paducah, Ky., where Mitch McConnell — the 77-year-old son of bluegrass country, now one of America’s three most powerful politicians as Senate majority leader — was finally asked a question that’s long been on people’s minds, about how he might handle an unexpected Supreme Court vacancy if one occurs during the 2020 presidential election.

It was in 2016, you surely remember, that Justice Antonin Scalia died suddenly and McConnell wouldn’t even allow then-President Barack Obama’s nominee, a thoroughly decent federal appeals court judge named Merrick Garland, to get a hearing. This wasn’t, McConnell insisted at the time, what it looked like — denying Obama his constitutional power to fill a vacancy that was never questioned for the 42 (cough, cough ... white) presidents who came before him, and a naked power play to make sure pro-business judges set our laws for the next 40 years.

No, the Senate leader told us, this was about the highest democratic principles, that "[t]he American people should have a voice in the selection of their next Supreme Court Justice,” while also claiming political precedents that didn’t really exist. Three years later, McConnell is now telling us that the people’s voice is only audible when it’s Republican voters looking to replace a Democratic POTUS.

“Oh, we’d fill it,” McConnell said Tuesday, unable to suppress his laughter that quickly spread through a room of Kentuckians who also see the lighter side of 21st-century neo-fascism. He prattled on for a minute or two about the importance of a permanent wall of judges which, in his words, “cannot be undone.” That’s just proof of how a U.S. government that fails to enshrine one person, one vote (neither in the electoral college nor the small-state rural dominance of the Senate) can — with the aid of McConnell’s ruthless realpolitik — create a judiciary that will control women’s bodies while cramming pro-corporate pablum down the throat of a nation that gives more popular votes to Democrats running for president (6 out of the last 7 times) and for our hopelessly gerrymandered Congress.

McConnell’s comment got some news coverage, but not as much as it should have. For one thing, the Senate leader’s amoral political cynicism has been barely concealed (if at all) ever since the dawn of the Obama presidency, when he declared the goal of what was once known, years ago, as “the world’s greatest deliberative body” was no longer to pass laws but to deny Obama a second term. And a lot of important news gets drowned underneath the Iowa-level flooding that is President Trump’s daily barrage of inane tweets and increasingly dictatorial policy pronouncements.

But May 28, 2019 should be marked on the calendar of American history as the day that democracy was taken off life support and officially declared dead — because there’s no longer even the slightest pretense of pretending that the ancient words of the U.S. Constitution, fealty to the rule of law, and 243 years of imperfectly upheld democratic norms matter anymore. McConnell and Trump — soon to be helped, no doubt, by the Brett Kavanaugh Supreme Court — are now in an arms race to see who can blow up America’s founding documents faster, through illegal wars and arms deals, tariffs by dictatorial fiat, ignoring subpoenas and now judicial orders ... all with that same knowing smirk.

Let’s quickly review a couple more of McConnell’s past and probable future crimes against democracy, lest you think that was an exaggeration:

– For all the (justified) talk about efforts to cover up the extent of Russian interference in the 2016 presidential election, arguably no actor did more damage than McConnell, who in September of that fateful year explicitly blocked the Obama administration from warning the public about Vladimir Putin’s ploy and from taking stricter measures to stop it. (Then, in a cynical ploy almost as shameless as his Supreme Court flip-flop, he used April’s release of the Mueller report to blame it all on Obama.) In 2019, McConnell is blocking bills that might prevent Russian interference in 2020.

– What does McConnell get out of his less-than-vigilant approach to Russian meddling in our democracy? One of his biggest donors (a whopping $3.5 million to McConnell’s leadership PAC) is Russian-born U.S. citizen Len Blavatnik, who’s maintained close ties in his homeland and has business partnerships with two Russian oligarchs who’ve figured prominently in Trump-tied scandals, Viktor Vekselberg and Oleg Deripaska. McConnell recently used his Senate clout to get U.S. sanctions lifted on Deripaska and his large aluminum company Rusal, which promptly announced a plan to invest $200 million in a new plant ... in McConnell’s Kentucky. (His biggest home state newspaper wrote flatly that “Kentucky might be going into business with the Russian mafia.”)

– Since Trump’s election, McConnell has taken a running tit-for-tat with Democrats over judicial nominations to its ultimate nuclear extreme, ramming through not just the president’s two high-profile Supreme Court picks but more than 100 federal judicial nominees (the vast majority of them white men, naturally) while refusing to even consider a slew of progressive bills like the Equality Act sent over since this winter by a Democrat-led House. These judges will guarantee for decades a legal order that protects the white patriarchy and business elites, in opposition to the will of the American people who are becoming ever younger, more diverse, and less enamored with the inequality baked into today’s capitalism.

– Believe it or not, things could get worse. This week there were reports that — if the House carries out its constitutional duty and votes to impeach Trump after airing the evidence in public hearings — McConnell and his Senate won’t bother to conduct a proper trial as was held for Bill Clinton in 1999, but stage a brief kangaroo court to absolve the president. That would be the equivalent of firing another round of bullets into democracy’s already motionless corpse.

The contrast right now between the two centers of power on Capitol Hill could not be greater. In the House, Speaker Nancy Pelosi — with her ability to keep a ridiculously diverse Democratic caucus together, both to win votes and support her leadership — has been America’s best traditional lawmaker since LBJ. But the traditions that she honors — as shown by her reluctance to confront the ongoing assault on the rule of law with Trump’s impeachment — are those of the 20th century, and they are getting steamrolled by the lack of respect that either Trump or McConnell hold for the unwritten rules of the democracy road.

As McConnell’s stranglehold on 21st-century American politics becomes clear, there’s been something of a cottage industry to discover why Mitch does what he does — to somehow find the soul inside this democracy-crushing machine. Within the last year, the New York Times Magazine invested months of reporting on McConnell, including interviews, seeking to find the motive. There was nothing there. The Kentuckian’s life journey from a young man who was ambitious but with a dollop or two of idealism — learning from a popular center-left war hero, Sen. John Sherman Cooper, hearing the words of Martin Luther King if not absorbing them — to a power-crazed institutionalist isn’t unique, but his long, strange trip has been even more amoral than most.

It’s pointless to ask “why” about Mitch McConnell. The only question that matters going into 2020 is “how” — How can McConnell be stopped? In the long term, his rise and his unholy reign pose hard questions about the very nature of American democracy and its foundation — whether the constitutional checks and balances of a Senate that gives citizens in Wyoming so much more power than their fellow Americans in California makes sense in today’s world.

But McConnell’s assault on democracy can also be stopped in the short run. For starters, the Senate majority leader is up for reelection in 2020, and even if you don’t live or vote in Kentucky, any American can donate or volunteer to help his election opponents. But even if that falls short, Democrats can end McConnell’s reign as leader — and make sure he’s not thwarting the replacements for aging Supreme Court justices like Ruth Bader Ginsburg or Stephen Breyer — with a net gain of three or four Senate seats.

For anyone who cares about keeping liberty alive, beating McConnell next year is every bit as important as beating Trump. That’s why it’s so frustrating that the elites of the Democratic Party don’t seem to get it. Rather than making a reclamation of the Senate the national moral crusade that it needs to be, the allure of the Trumpian reality show has sucked the top tier of potential candidates — Beto O’Rourke and Julian Castro of Texas, Steve Bullock of Montana and Stacey Abrams of Georgia — into the presidential race or related pursuits. Vanity and shortsightedness could leave a President Warren or Harris or Biden one vote short in 2021 of the progress that their voters demanded.

The only good news is that the 2020 general election is still 16 months away — plenty of time for the Democrats and concerned voters to shift gears, make the Senate a priority, keep liberty alive ... and wipe the smirk off Mitch McConnell’s face.