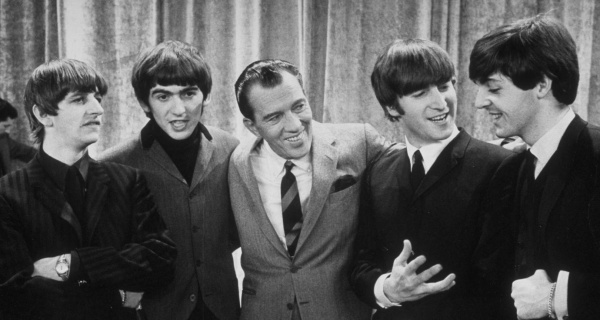 In 1964, Beatlemania officially reached America. On February 7, 1964, the Fab Four—John Lennon, Paul McCartney, Ringo Starr, and George Harrison—boarded Pan Am Flight 101 at London's Heathrow Airport with an estimated 4000 fans on hand to wish them good luck on their first trip to America. When they landed at New York City's JFK Airport several hours later, another crowd of approximately 4000 (screaming) fans were waiting for them. But that was nothing compared to the number of people who would tune in to see the legendary rockers perform on The Ed Sullivan Show on February 9, 1964. On the 55th anniversary of that historic television event, here are 10 things you might not know about the show.

Much like The Tonight Show today, being asked to appear on The Ed Sullivan Show in the 1960s was a huge honor for up-and-coming (and established) artists in the 1960s. The publicity generated from an appearance on the show was enough for most talent to say yes. But The Beatles would only agree to appear if the show covered their travel expenses and paid them a $10,000 fee (which would be just over $80,000 in 2019 dollars). Sullivan and his producers agreed, but only if The Beatles would commit to making three appearances. They had a deal.

2. ... BUT THEY ENDED UP BEING A RELATIVE BARGAIN.

Though forking over travel expenses and an appearance fee wasn't the norm for The Ed Sullivan Show, it ended up being a great deal for the program, and proof that Beatlemania was just as thriving in America as it was in the UK. It's been estimated that close to 74 million people—40 percent of the country's population at that time—tuned in to watch The Beatles play.

While The Ed Sullivan Show marked the first time The Beatles had performed live on American television, it wasn't the first time they had appeared on American television. On November 18, 1963, NBC's The Huntley Brinkley Report aired a whopping four-minute-long segment on Beatlemania—the craze that was sweeping England. Just a few days later, on November 22, CBS Morning News ran a five-minute segment on the band's overseas popularity. The segment was scheduled to re-air that evening, but the news was preempted because of JFK's assassination. Walter Cronkite eventually re-aired it as part of the CBS Evening News on December 10, 1963.

While more than a third of America's population witnessed music history in the making the night The Beatles appeared on The Ed Sullivan Show, 728 very lucky individuals got to see it all go down live as part of the show's audience. And when we say "very lucky," we mean it: the program received a record-setting 50,000 requests for tickets to the show.

In terms of timing, the assassination of President John F. Kennedy and the rise of Beatlemania in America were closely linked. While many people at the time decided that the band's popularity was in part due to the president's death—that Americans needed something upbeat and positive—others believe it's purely coincidental. In 2013, Slate ran a piece debating (and largely debunking) "the questionable connections between Camelot’s demise and Liverpool’s ascent."

6. THE BEATLES WEREN'T THE EVENING'S ONLY PERFORMERS.

Remember Charlie Brill and Mitzi McCall? No? That's OK. Neither do the majority of the 74 million people who watched The Ed Sullivan Show that night. Brill & McCall were the unfortunate act who had to follow the Fab Four's Earth-shattering, industry-altering performance. The married sketch comedy duo pretty much bombed, as the audience was rather distracted. In 2014, the couple—who will celebrate their 59th wedding anniversary this year—talked about that infamous night with CBS.

"For us, it went lousy," McCall said, laughing. "It was terrible.”

"We were doing a sketch," Brill added. "We couldn’t hear each other. Because of the screaming."

Though the appearance didn't do much to advance their career, ultimately, McCall said, it was "an honor" to be a part of it. "We were there when the world changed," she said.

7. ONE OF THE MONKEES WAS ON THAT NIGHT, TOO.

Davy Jones was also on The Ed Sullivan Show that night, but not as part of The Monkees. Jones was performing with the cast of Broadway's Oliver! Jones played the Artful Dodger, first in London then in New York, and ended up being nominated for a Tony for the role.

You've surely heard that old legend that the crime rate in the U.S. dropped dramatically during The Beatles' appearance on the show. Apparently, the whole nation was so transfixed by the lads from Liverpool that everyone preferred to tune in instead of running around committing felonies and such. It's a nice story, but according to Snopes, it's not true.

The rumor started when Bill Gold, a reporter from The Washington Post, snarkily remarked that while The Beatles were on that evening, no hubcaps were stolen anywhere. It was meant to infer that The Beatles appealed to the type of degenerate who would do such a thing, but the meaning was twisted and reprinted by Newsweek. Gold ended up writing a tongue-in-cheek retraction on February 21, 1964:

"This week’s issue of Newsweek quotes my report from B.F. Henry that there’s one good thing about the Beatles—'during the hour they were on Ed Sullivan’s show, there wasn’t a hubcap stolen in America.'

It is with a heavy heart that I must inform Newsweek that this report was not true. Lawrence R. Fellenz of 307 E. Groveton St., Alexandria, had his car parked on church property during that hour—and all four of his hubcaps were stolen.

The Washington Post regrets the error, and District Liner Fellenz regrets that somewhere in Alexandria there lives a hipster who is too poor to own a TV set."

Wasn't it nice that Elvis Presley kicked off The Beatles' American "debut" with a personal telegram? Just before John, Paul, George and Ringo took the stage, Ed Sullivan announced that he had received a "very nice" telegram from The King, wishing the Fab Four "tremendous success." Notoriously known for being jealous of The Beatles, Elvis had actually done no such thing. His manager, Colonel Tom Parker, was responsible for the note, and only sent it because he thought it would make Elvis look good. (Apparently, the disdain was mutual; when the band received the telegram prior to their performance, Harrison reportedly asked, mockingly, "Elvis who?")

The crowd (and a third of America) may have been going crazy when The Beatles performed, but Ray Bloch—The Ed Sullivan Show's musical director—wasn't as impressed. When asked for a comment about the performance by a reporter for The New York Times, he was blunt: "The only thing that’s different is the hair, as far as I can see. I give them a year."