UPDATE: Suge Knight collapses in court after being ordered held on $25 million bail in hit and run murder case{If it wasn't on video, we wouldn't believe this story) 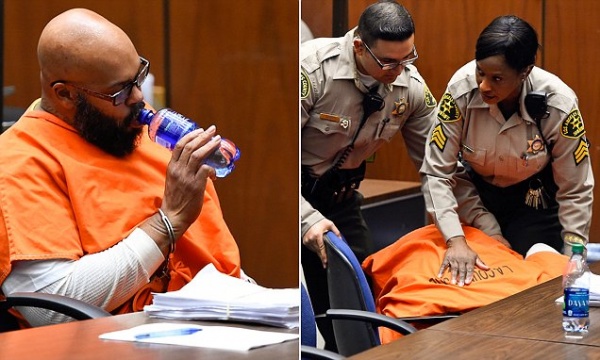 Fletcher said Knight was unconscious when the lawyer left the courtroom and an update on his condition was not immediately available.

Knight fell while deputies were bringing him back into the courtroom after Fletcher asked a judge to reconvene a hearing and issue an order that Knight be given his medication.

The attorney said Knight is being kept in solitary confinement without proper access to medication.

The defense lawyer told reporters after the turbulent bail hearing that his client was unconscious, but a prosecutor said she believed the defendant staged the fainting spell 'in front of the cameras,' reported the Los Angeles Times.

Earlier this month, Knight was hospitalized after complaining during a court hearing that he was suffering from blindness. In all, he's been taken from the courtroom by ambulance four times.

Since his arrest in late January, Knight has been complaining of his treatment in jail, claiming that he was being kept in solitary confinement, deprived of hot water and blankets, and seldom allowed to bathe.

Talking to NBC Los Angeles, Matthew Fletcher said that moments before his client's collapse, Knight appeared ill and said he had not been given his medication.

'He was dripping sweat, like someone poured a bucket of water on him,' the lawyer said.

Knight stands accused of intentionally running down two men with a pickup truck at a Los Angeles area burger stand January 29 following an argument on the set of a commercial for the film Straight Outta Compton.

The 49-year-old co-founder of Death Row Records has pleaded not guilty to murder, attempted murder and hit-and-run charges.

Los Angeles Superior Court Judge Ronald S. Coen set bail for Knight, ordered the amount after Deputy District Attorney Cynthia Barnes noted that Knight was on bail in a robbery case at the time of the hit-and-run crash.

Knight's attorney argued that his bail should be set at $2million, telling the judge that had his name not been Suge Knight, prosecutors 'wouldn't have filed the case.'

In seeking the multimillion-dollar bail, the Los Angeles County District Attorney's Office filed an extensive motion of 295 pages of legal papers and supporting material portraying Knight as a career criminal and repeated violator of probation and parole dating back to 1987.

The motion alleges that Knight is ‘physically incapable of stopping his violent criminal behavior’ and that since being released from prison in 2002 he ‘has continued his repugnant life of crime.’

The documents also alleged that Knight is part of an ‘ongoing extortion scheme’ in which new rappers arriving in Los Angeles and Las Vegas are ‘required to pay a “tax"’ to Knight.