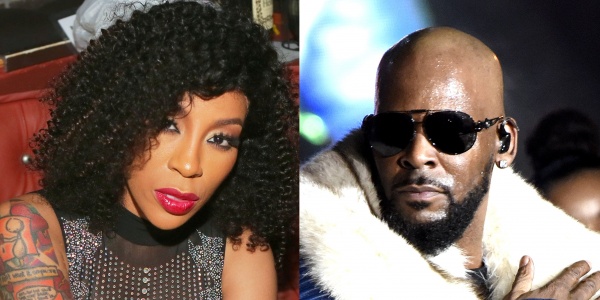 For better or worse, K. Michelle always expresses what’s on her mind, whether it’s in word or song, if it’s on her mind, we’ll hear about it. In her song “Build A Man,” K. Michelle speaks about her past relationships with various men, one of them being R&B singer R. Kelly.

There was Kellz, he adored me
Loved to hear me sing but control me

Despite, K. Michelle directing some unwarranted vitriol toward Loni Love, calling her “ham hock,” “roast beef,” and “hamburger” among other things, she still made her way to the couch on “The Real.” At the beginning of K. Michelle’s segment, the two cleared the air.

Later, she discussed her relationship with R. Kelly and reminded us that we need to be careful when we tell other women we don’t believe their stories.

Adrienne Houghton: You’ve been open about your relationship with R. Kelly in your song “Build A Man,” calling him “controlling.” Now I’m sure you’ve also heard a lot of the stories from a lot of the women – and in many cases, underage women…

Adrienne: …that were accusing him, like our past guest, we actually had Jerhonda Pace on the show, who have come forward also saying that he is controlling and has taken advantage of them. So what are your thoughts about this?

K. Michelle: That gets kind of tricky for me, um, because I see it from two different perspectives – I see it as, you know, this is my mentor, he taught me everything I know about recording, about how to write, the importance of just doing music. And you want to have loyalty for that, but at the same time, I was the girl who was saying something happened to me, and the world told me that it didn’t happen. And so, when I’m looking on the blogs, and I see girls telling their stories, and women all up under these comments like, ‘That didn’t happen. Oh she lyin.’ She-” It breaks my heart because I was once that girl, like somebody know the truth, nobody gonna take up for me? So it’s left me in a very, you know, funny place, people have asked, this is really the first place I’m speaking about it. I got out of the situation. It was something that I think affected how I thought of myself and how I love men, and you know, I was able to get out of it. So all I can say is to make sure you watch when you tell somebody a specific event didn’t happen to them. Because they could be really going through something. So I’m not here to say if those girls did, did he do that, whatever, all I know is that, you know, everything isn’t always what it seems, especially in the music business.

K. Michelle has personal experience with women not believing her. Remember on “Love and Hip Hop Atlanta” when she was trying to tell Rasheeda that Memphitz had been abusive during their relationship? Women, including former “The Real” host, Tamar, came out of the woodwork to call K. a liar. She was ultimately vindicated when she won her case against the producer. Not to mention, Memphitz spiraled out of control, showing a different side of himself, causing Toya Wright to divorce him. she certainly has a point.

So she certainly has a point. We need to listen to women, believe women. And if we can’t do those things, the last thing we should be doing is telling them that what they’ve experienced and recounted didn’t happen to them. It adds trauma and more pain to an already devastating situation.

Still, it would be nice if K. Michelle extended this same type of “women stick together” attitude to other aspects of her life. While it’s been a minute since she’s popped off, her history of speaking negatively against other women is long and sordid.

Consistency is important. And it would be nice if superstars like K. Michelle could promote the same messages even when they’re not the benefactor of women’s support.