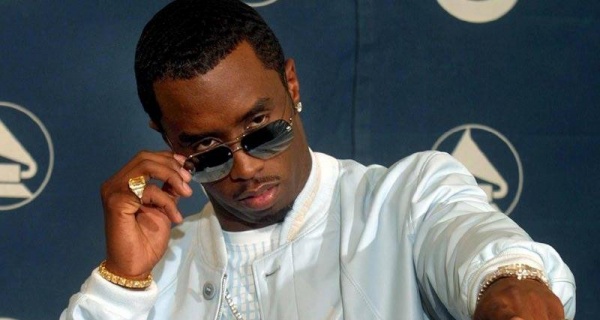 Diddy has shown off his palatial mansion in Los Angeles.

The 48-year-old singer opened the doors to the very large property when answering 73 questions for Vogue.

While talking about being a father to six kids, inviting Leonardo DiCaprio to his white party in 2018 and deciding to not run for president in 2020, the rap icon walked around the spread revealing two large living rooms and a giant Christmas tree.

The ex-boyfriend of Jennifer Lopez began the interview on his spiral staircase as he politely greeted the reporter.

The fashion designer was asked right away why he moved from New York to Los Angeles.

'It was for the kids, the family, the weather,' said the Last Night singer as he spun around in his roomy hallway.

The European-style villa has about 17,000 square feet of living space.

There’s another 3,000 square feet in another structure.

The grounds are one acre and has a 'lagoon-style swimming pool with a grotto connected by an underwater swimming tunnel' according to the Los Angeles Times.

When asked to describe himself, Diddy said: 'I am vivacious, eccentric and I'm a Scorpio,' he said with a big smile.

'There are no misconceptions about me,' clarified the star who has made headlines for years about his dating life. He is currently with Cassie.

He said his biggest strength is his belief in God and his weakness is fried chicken.

For Christmas he wants to 'open a whole lot of gifts.'

He added that 'family is my tribe' and when asked to name all six kids, he did so slowly: 'Quincy, Justin, Christian, Chance, D'Lila, Jessie,' he said.

And when asked what he wants for his kids, Diddy said: 'Peace, happiness, love. I want it all for my kids... money too,' he said with a smile.

His biggest inspiration is his mother and he said when Jay Z and Beyonce had twins he told them: 'Get ready for double the love.'

The star also looked back: 'Biggie's legacy is that he is the greatest of all time.'

The last movie that made him laugh was Eddie Murphy's Delirious.

As far as his early days growing up in New York, he said he knew at age 12 he wanted to be an entrepreneur when he started a paper route.

But he has learned over time, 'It's all about the love, not the Benjamins.'

He then plugged his Ciroc brand as he walked to a bar where a bartender was waiting for him.

His favorite food is soul food and he loves apple pie with ice cream as a midnight snack.

Diddy likes to 'relax in the Caribbean' and even gave an update on his butler Farnsworth Bentley: 'He's doing great.'

And the star had an announcement: 'The White Party is coming back this year for charity.'

He added he wants to invite Leonardo DiCaprio but did not say why.

He also commented he loves his own style and his favorite article of clothing is socks. What he treasures his double-breasted vintage Ralph Lauren suit. His fashion mentor is his mother and his favorite designer is Tom Ford.

As far as his favorite shoot, it was for Vogue and called Puffy Does Paris. It was shot my Annie Leibovitz and Kate Moss was in there.

'If I'm not fresh, I can't make a hit,' he said to explain why he loves fashion so much.

He showed off his CFDA Award and said he was proud because he was the first African-American to win. He competed with Marc Jacobs and Ralph Lauren.

Diddy, born Sean Combs, showed off his awards and said his favorite Grammy is for No Way Out.

Other things he revealed is that he would love to have collaborated with Michael Jackson and he hopes to one day act with Denzel Washington.

A memorable moment was performing I'll Be Missing You at the MTV Awards with Sting, adding it was life-changing.

The star was plugging his new show The Four, which launches January 4 on Fox with Fergie and DJ Khaled.

When asked if he would run for President next, he said no, but he wants to make some 'positive changes in my community.'

He wants people to not get 'shot or killed or oppressed' ad he wants 'peace and love.'