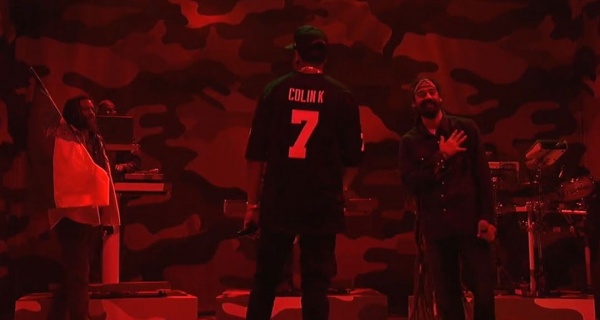 Jay-Z saluted Colin Kaepernick on the Season 43 premiere of Saturday Night Live, where the rapper wore a custom-made football jersey emblazoned with "Colin K" and the quarterback's #7.

Taking a Stand: 10 of the NFL's Most Notable Activists and Advocates
From Colin Kaepernick to Peyton Manning, we look at the football players who have stood (or kneeled) for what they believe in
The rapper wore the jersey for his first performance of the episode, a rendition of 4:44's "Bam" that featured a guest appearance by Damien Marley, who also appears on the studio version of the track.

During Jay-Z's headlining set at Queens, New York's Meadows Festival in September, he dedicated his "The Story of O.J." to Kaepernick, the first football player to protest during the National Anthem. The quarterback remains unsigned, likely due to his catalyzing of the demonstrations that have now swept through the NFL.

"I want to dedicate this song to anyone that was held back and you overcame," Jay-Z said at Meadows.