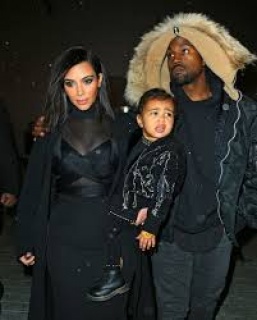 Kanye was discussing how the fashion stopped taking him seriously as soon as he and Kim got together.

'Soon as we started dating, fashion people were really opposed to the idea of reality stars. And all the relationships, the somewhat friends that I had somewhat built up, completely turned their backs on her and me.'

'They already had their back to her, and now they turned it to me,' he said.

'The so-called traction that I was getting in the high-fashion world was completely thrown out the window and I was finally allowed to go to school, where every day I was in my mom [Kris Jenner]’s house, in my little brother’s old room, Rob’s old room, re-tailoring...

The 37-year-old, who is trying to break down elitism and separatism in high-end fashion, said he was perplexed designers do not work with Kim and her famous figure, because she has 'the body of all bodies'.

He claimed Kim's look at the recent Grammy's was the best red carpet outfit was the greatest ever seen.

The musician is currently partnering with Addidas to design a line that gives 'everyone a piece of the so-called good life' and not just the very rich who can afford the likes of Yves Saint Laurent's 'unfair' prices.

His NYFW debut had a couple of hiccups, including a tantrum from daughter North West sitting in the front row and a half-hour delayed start time, but for the latter at least he did say sorry.

'I apologize that people had to wait. That’s definitely not something I did on purpose,' he insisted.

'I actually had no idea what time it was. I wasn’t looking at the clock or in charge of that. It’s literally my first proposition in three years. So I apologize for the wait, to the people that had to actually wait at the New York fashion show.'

'Let me just explain something to everyone. I’m sorry. I’m a human being. I’ve got opinions, I’m not always right, I’m not always on time, I don’t always say things in the proper way, but my intentions are always extremely pure. My purpose is extremely just.'

This is Kanye's third line launch, with the previous two not attracting very favorable reviews. however West claims he didn't know who he was back then.

'I didn’t know who I was until I had a daughter,' he said. 'And then I realized that the purpose of life was to protect her and my wife at all costs. And that is who I am.'