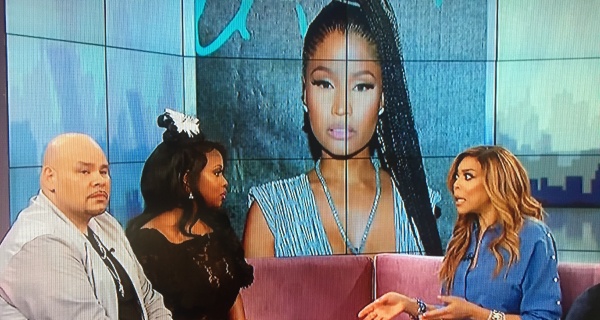 In the midst of a heated feud with Nicki Minaj, which has already spawned two diss tracks (“shETHER” and “Another One”), Remy Ma opened up about the beef on “The Wendy Williams Show,” revealing that it was behind-the-scenes drama, not thinly-veiled slights, that sparked bad blood.

“It wasn’t necessarily the little subliminal stuff on records because I didn’t care,” she said with Fat Joe by her side. “I don’t care about records. I’d spoken to her before like, ‘Whatever you say, you supposed to say you the best and none of y’all better than me.’ It was the behind-the-scenes things that you people will never know about, as far as, trying to keep me off of red carpets, trying to make sure awards don’t go to me or she’s not going to be in attendance, or trying to get people to make bad reports about my album sales, or just anything that I’m doing to make me look less and make her look better. I have a problem. When you’re trying to stop my bag, when you’re trying to stop me from taking care of my children, now, I have a problem with that.

“To me, the record that she did that everyone was saying, and that I also heard behind-the-scenes that she was promoting as the record that was going to ‘end’ me, I thought it was wack,” she added. “I didn’t care about that. To be honest, I didn’t care. What bothered me was the behind-the-scenes things. You’re so up and so on top of everybody, you’re better than everybody, why are you worried about little ol’ me? I just came home from prison. I don’t want no problems with nobody.”

According to Remy, “shETHER” only resulted in further behind-the-scenes drama. “Instead of keeping it hip-hop or whatever, they’ve been trying to do things like pull it off of SoundCloud, pull it off of YouTube,” she said. “It’s still No. 2, last time I checked, on iTunes. But I probably got about two more days before it comes down, so make sure you guys go and get it, if you want to hear it before it’s gone.”

The jabs seemed to continue, even down to Remy’s wardrobe. Wearing all black and a veil, she acknowledged that she was prepared for a funeral. “I came appropriate for the services,” she said. “My grandmother always told me to never speak ill of the dead. So, we’re just going to leave this conversation alone and move on.”

Remy and Joe were on “Wendy” to promote their recently-released Plata o Plomo LP. They also performed their single “Money Showers” on the show, with Sevyn Streeter replacing Ty Dolla $ign on the hook. Watch the performance and see more highlights from Remy’s Nicki conversation below.

On Nicki Minaj’s Past Feuds: “It wasn’t that [Minaj] was targeted. People don’t understand. I hear people like, ‘We’re waiting for [Nicki’s] response.’ [‘shETHER’] was a response. She started [the beef]. I feel like it’s weird because she’s been doing this to a lot of females from Lil’ Kim to Mariah [Carey] to Taylor [Swift] to [Miley Cyrus], and no one says anything.”

On Her ‘shETHER’ Research: “We can be friends and I will be cataloging information, while we’re cool, just in case, by some chance, we get into it one day. Nothing ever happens, I’ll never open the file cabinet. But if we do…”

On Meek Mill’s Involvement: “Me and Meek had a relationship prior to this. When I first came home and he was incarcerated, we would talk on the phone. I hadn’t spoken to him since they were together. I’m not gonna sit here and be like, ‘Oh, it was a malicious conversation.’ People feel like he was foul, but there’s a lot of foul things people do when they break up, like, you know, having to break up with you, and three days later, you’re with my worst enemies.”

On Nicki Minaj: “This person, just based on what I’m witnessing, is not a nice person. If I’ve learned anything from this, it’s made me realize that I have to be a certain way to everybody, the help, the hair, the person holding the door, the cab or car driver, because so many people have been coming and the things that I’ve been hearing, I’m petty, like really, really bad. The things I’ve been hearing, I’m like, ‘Nah, I’m not gonna say that. That’s too much.’ Somebody once said, when they were in the middle of a rap battle, you gotta be careful who you choose your battles with, who you pick fights with.”