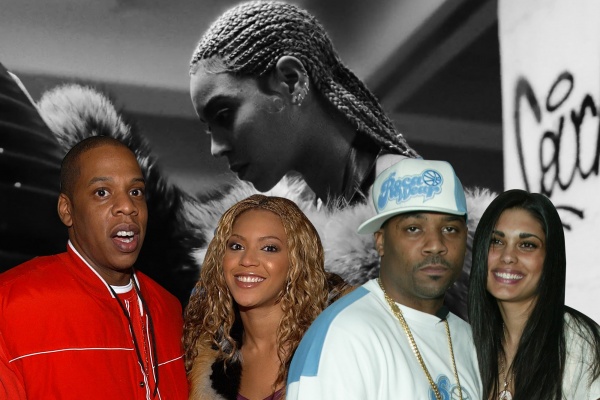 Rachel Roy kicked the Beyhive. What transpired was worse than the end of My Girl.
Let’s back up a few steps. On Saturday night, Beyoncé premiered her surreal, stunning visual poem Lemonade, a Malick-esque cinematic companion piece to her album of the same name. Equal parts vein-opening confession, Black Lives Matter manifesto, and celebration of black womanhood, the film piqued tabloid theorists’ interest with its myriad references to Queen Bey’s marital strife.

On the track “Anger,” she stalks about a parking lot screaming, “If you try this shit again, you’re gon’ lose your wife,” before spiking her wedding ring at the camera, and in “Apathy,” she starts things off with a mock eulogy for her marriage (“Ashes to ashes, dust to side chicks”), before dropping a cryptic clue as to the identity of the other woman: “He better call Becky with the good hair.”

So, hours after Lemonade dropped, the fashion designer Rachel Roy posted the following photo to Instagram along with the caption: “Good hair don’t care, but we will take good lighting, for selfies, or self truths, always. live in the light #nodramaqueens.”

The Beyhive, her rabid Internet fan base, went full Sasha Fierce, filling her comments and @ mentions with nasty threats, hacked her Wikipedia page, and, after she deleted the post and made her Instagram page private, went after her daughter. They even accidentally targeted the cooking show host Rachael Ray, mistaking her for Rachel Roy.

While Roy did bring some of this backlash on herself by posting the image/caption in question, the punishment did not fit the alleged crime.

All this rabid speculation, of course, began in earnest when security footage emerged in May 2014 of Solange going Street Fighter on Jay in an elevator as a nonplussed Bey watched on. The incident occurred following a Met Gala after-party wherein the Sisters Knowles reportedly confronted Roy over her chummy relationship with Jay Z.

“Solange was defending Beyoncé in the elevator because Solange finds Jay’s friendship with Rachel to be WAY too close for comfort and it makes Solange very uncomfortable,” a source told Hollywood Life. “Beyoncé also confronted Rachel and said, ‘Don’t talk to my sister like that,’ after [Rachel] confronted Solange.”

Roy has since been painted as the thirsty side chick scamming on Beyoncé’s man—she was Ali Larter in Obsessed—while Jay Z was the tempted, happily married husband, merely reduced to a meme-ified punchline. You heard that right: a semi-successful, stunning fashionista was the predator, not the powerful music mogul who not only has a history of questionable behavior, but is also benefitting financially from this entire soap opera, with Lemonade available exclusively via his streaming service Tidal.

And the disproportionate Roy-bashing seems even more absurd when you consider she is the ex-wife of Damon Dash, Jay Z’s former best friend/business partner turned enemy, and that this is not the first time the two have been involved in a bizarre love triangle.

Harlem native Damon “Dame” Dash” and Brooklyn’s Shawn “Jay Z” Carter met in 1994, when they were introduced by DJ Clark Kent. Dash was the entrepreneur, while Jay, a former drug dealer turned rapper, was the talent. In 1996, after the major labels passed, the two—along with Kareem “Biggs” Burke—started the label Roc-A-Fella Records in order to release Jay Z’s debut album Reasonable Doubt. Soon after, they started the successful clothing line Rocawear.

Things were relatively peachy on the Roc-A-Fella front until 1999, when both Jay Z and Dash began pursuing the 20-year-old R&B artist Aaliyah.

“I was going at her, and Jay was going at her. He knew her before I did,” Dash told Hip-Hop Motivation. “It was just a situation where Aaliyah was the type of girl that would give you a shot. She didn’t care what people thought or whatever. So, she’ll date you and be your friend. You might end up in the friend zone. A lot of times, that’s what happened. You weren’t just going to hit that. At least in my experience. Somebody may have had a different experience at a different time in her life.”

Dash won Aaliyah’s affections over Jay Z, and the pair began dating in late 1999, but he says there was a bit of apprehension over the fact that Jay Z had initially pursued her. “We developed a real friendship before [dating], but there was always apprehension because other people would try to get at her first. So I had to, but then it was just like, ‘Fuck it.’”

The two dated up until Aaliyah’s tragic death in a plane crash on Aug. 25, 2001. Dash later said that while they weren’t formally engaged, they’d discussed plans to marry.

One year after Aaliyah’s passing, in 2002, rumors began circulating of a growing rift between Dash and Jay. Dash had signed his childhood pal Cam’ron to Roc-A-Fella—much to Jay’s chagrin—and attempted to install him in an executive post at the label, which was blocked by Jay. Furthermore, since Jay was planning his retirement after The Black Album, Dash was plotting his own future, rounding up a stable of artists he’d discovered.

“At a certain point, I got ready to depend on my other artists,” Dash later told New York Magazine. “I started putting together an army—Kanye, Cam’ron, Beanie, the Diplomats. I figured Jay gave me time to prepare.”

By 2004, Def Jam had offered to purchase Roc-A-Fella Records and install Jay as their CEO. According to New York Magazine, Jay invited Dash out to dinner at Da Silvano to break the news. Dash begged him to not take the name Roc-A-Fella, while Jay offered to give up everything—the new post at Def Jam and Roc-A-Fella Records—if he could have the masters back of Reasonable Doubt. Dash declined, and after Jay, Dash, and Biggs sold their 50 percent stake in Roc-A-Fella to Def Jam, giving the label complete ownership, Jay reclaimed his masters, kicked his two pals to the curb, and assumed the position of CEO.

“He said, ‘It’s business,’” Dash explaiened to New York Magazine. “But we were always supposed to be about more than business, Jay especially… I did everything I possibly could so that he didn’t have to raise his voice. He just had to whisper something in my ear and I’d take care of it. The people I fought with to make money for him, Lyor Cohen and Kevin Liles”—Def Jam execs—“he’s made friends with. He hangs out with Puff now. It’s like if your brother leaves you.”

Cam’ron and his hip-hop collective the Diplomats left The Roc for Warner Brothers, while the bulk of the artists on Roc-A-Fella stayed on with Jay Z over Dash—including Dash discovery Kanye West.

West later explained why he sided with Jay Z over Dash in a 2013 interview with Power 105.1’s The Breakfast Club.

“The problem was with Dame his truth was more accurate and more closer to what mine was, but his technique was harsh for me as a young kid and stuff,” said West. “I felt like a little bit more pressure. And Jay Z was a nice guy. And also I felt like I had that truth that Dame has in him. We the same. Me and Cam, me and Dame, we the same. But I wanted to learn this technique that Jay got of actually being likable… So, Jay Z know how to move in a room full of vultures. You know what I’m saying? As his little brother, I needed to learn that technique because I got something that God want me to give the world.”

Dash started his own imprint, Dame Dash Music Group, but it folded shortly thereafter, and he never regained his former glory. Around this time, in 2005, he married Rachel Roy, a former creative director at his Rocawear who—with Dash’s help—had launched an eponymous fashion line. They had two daughters before splitting in 2009, and in April of last year, their custody battle came to an end less than a year after the Met Ball incident.

“Dash has lost sole and physical custody of his two daughters, 15-year-old Ava Dash and 6-year-old Tallulah Dash, to ex-wife Roy,” reported E! News, who’d obtained the court documents. “The fashion designer also successfully obtained a three-year restraining order against her ex, which also includes an order of protection for her daughters.”

While Jay’s remained relatively mum about the state of his relationship with Dash, the latter has opened up about it quite a bit over the years, claiming Jay “betrayed” the company and even alleging he was tied to “informants.”

Their beef will, of course, forever be immortalized on the remix of Kanye West’s “Diamonds Are Forever.” In it, Jay raps, “I took the name, I take the blame,” later adding, “I’m not a businessman / I’m a business, man / So let me handle my business, damn!”