The 'Oscar's' And The Racial Divide In Hollywood 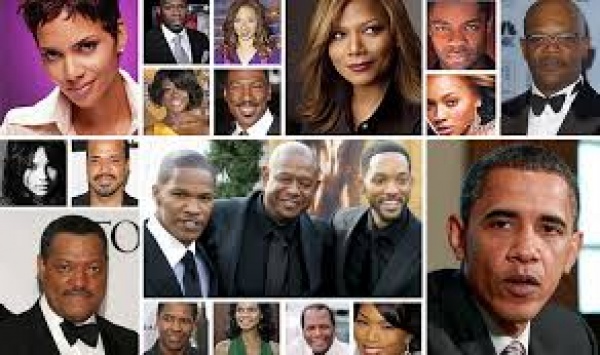 Date Posted: Wednesday, January 20th, 2016
For the second year in a row, the Academy nominated only white actors in all the acting categories. But experts say the diversity problem reaches far beyond awards shows.

This year’s all-white acting Oscar nominations have once more provoked an outcry over the lack of recognition given to people of color in Hollywood – a view that echoes controversy from the previous awards season. (See #OscarsSoWhite.)

In 2015, pundits set their sights on the Academy itself, a club “older and more dude-heavy than just about any place in America,” as The Atlantic’s Derek Thompson put it.

But while the voting body of the Academy of Motion Picture Arts and Sciences continues to draw criticism for its “great male whiteness,” experts and advocates are now also underscoring a more fundamental lack of diversity in the structure of film and television – even as they acknowledge the headway the industry has made over the past decade.

“Undeniably, there has been progress,” says Darnell Hunt, director of the Ralph J. Bunche Center for African American Studies and a professor of sociology at the University of California in Los Angeles. “But [that] progress has not kept up with America. The gap between where we are as a society and the industry is increasing.

“Nirvana would be when the studios and executive suites themselves become diverse,” he adds. “That’s when we’ll say there’s success.”

This year’s nominees, released Thursday, featured titles like “The Revenant,” “The Martian,” and “Mad Max: Fury Road,” for the best picture category. Conspicuously missing, some say, were films like “Straight Outta Compton” and “Creed,” which – unlike the movies that did make the list – starred black lead actors.

The same pattern emerges among the nominees for Best Actor and Best Actress, as well as the Best Supporting categories: all the names belong to white actors, even as critics noted the absence of Idris Elba for his performance in the Netflix-produced “Beasts of No Nation” and Will Smith for “Concussion.”

And while Mexican filmmaker Alejandro Iñárritu, who helmed “The Revenant,” added diversity to the Best Director list, no women made the cut.

Academy president Cheryl Boone Isaacs diplomatically acknowledged the issue Thursday following the release of the nominations, telling Deadline, “Of course I am disappointed. But this is not to take away the greatness [of the films nominated]. This has been a great year in film.”

'Entertainment that reflects our world':

Few deny the industry has taken steps toward improving diversity.

Black historical movies such as “The Help,” “12 Years A Slave,” and “The Butler” have, in the past few years, earned both critical acclaim and box office success – with "12 Years a Slave" taking home the best picture award in 2014. Lupita Nyong'o also won best supporting actress for her role in that film. Both “Creed” and “Straight Outta Compton,” too, topped the charts in ticket sales worldwide, raking in $120 million and $200 million apiece.

Nor is it all just prestige dramas and biopics: The “Fast and Furious” franchise, which has grossed nearly $1.5 billion globally since the first film’s release in 2001, stars actors of white, Hispanic, black, and Asian descent. And in casting Daisy Ridley and John Boyega, the record-smashing “Star Wars: The Force Awakens” takes up the trend of reimagining women and minorities in traditionally white, male roles – something movies such as “The Hunger Games” series and “I Am Legend” have done, as well.

“The old conventional wisdom that to make a successful film, you can’t have leads of color or it’s rare to put a woman in the lead? That whole idea’s been smashed,” says UCLA’s Professor Hunt.

Television has made even greater strides. Gone are the days of “Full House” and “Friends,” when white actors dominated the screen. From “Scandal” to "blackish," and “Jane the Virgin”; from “Empire” to “The Mindy Project” to the hacker series “Mr. Robot,” networks and streaming services alike have begun to embrace the value of diversity – at least in terms of attracting audiences that boost ratings.

“It’s like suddenly the networks got the memo: ‘Guess what, diversity sells,’ ” Hunt says. Citing last year’s Hollywood Diversity report, to which he contributed, Hunt says that in 2014, ratings peaked for shows with casts that were 30 to 40 percent minority. “People don’t only watch people like themselves,” he notes, “but they do like seeing their stories.”

“It’s about creating entertainment about our world that reflects our world,” adds Melissa Silverstein, writer and founder of Women and Hollywood, a site dedicated to women, film, and pop culture. “You look at a cast of an ensemble TV show, they just can’t get away with white, white, white [anymore]. I think what television really understands is that diversity is vitally important.”

Under the leadership of Ms. Boone Isaacs, who became president in 2014, the Academy also has pushed forward with diversity initiatives – albeit slowly.

At the 2015 Governors Awards, the Academy’s guests of honor were women and a black man: actresses Gena Rowlands and Debbie Reynolds, and director Spike Lee, who was awarded an honorary Oscar. That same night, the Academy launched A2020, a five-year plan to improve the diversity of the Academy by reevaluating its practices and pushing to bring new voices into the organization, according to The Hollywood Reporter.

Those steps, Hunt says, are critical.

“The Academy sets the standards for what constitutes quality and artistic merit. Those types of projects naturally appeal to studios,” he says. “If Academy Award winners year in and year out represent the same kind of film projects, studios are going to make those types of projects, and audiences are going to be denied the stories that would resonate more with America.”

The 'new frontier' in diversity:

Amid the highlights, however, looms a larger challenge – one that centers on opportunity.

“In a truly egalitarian society, everyone should be chosen to act based on how talented they are and what the role calls for,” says author Paul Levinson, a professor of communications and media studies at Fordham University in New York. “In an ideal world, people could make movies about whatever they thought was important, and they could get the best possible people for it,” regardless of color or gender.

But for such a world to even begin to exist, change needs to come from within the industry – especially at the top, where the decisions are made about which films to make, and who will direct, write, and star in them, Hunt says. As of 2014, 94 percent of film studio heads were white and all of them were male, the Hollywood Diversity report found. Television is little better, with 96 percent of network and studio executives white and 71 percent male.

On Friday, Fox announced it was seeking an African-American actor for a reboot of "24," to take over for longtime star Kiefer Sutherland. But critics say change in front of the camera doesn't go far enough.

Sure, “They’ll take a Nancy Drew story and cast it in unconventional ways,” Hunt says, referring to an upcoming CBS adaptation of the classic detective novels that will feature a non-white lead. “That’s great, but not enough. Casting is not the end goal.

“It’s same people making those decisions,” he continues. “Imagine what could come out of the industry if the executive suite itself is more diverse. That’s the new frontier.”

However, experts say TV is at least a step ahead, with prominent show-runners such as Shonda Rhimes, Kenya Barris, and Lee Daniels, who also directed "The Butler."

And people in the industry are recognizing the problem and giving it voice.

“The only thing that separates women of color from anyone else is opportunity,” noted Viola Davis, in her acceptance speech as the first actress of color to win an Emmy for best actress in a drama for her role in Ms. Rhimes's “How to Get Away with Murder.” “You cannot win an Emmy for roles that are simply not there.”

Upon receiving his honorary Oscar from the Academy in November, Spike Lee, never one to mince words, also drew attention to the challenges facing black professionals in the industry, saying, “It's easier to be the president of the United States as a black person than to be the head of a studio.”

Shaking up the status quo will require more than a little effort. Still, some say that starting from the bottom – giving female directors and filmmakers of color more paths to film festivals and other areas to showcase their work, urging young people to attend film school – is key.

“They need opportunity, they need nurturing, they need mentoring,” says Stephane Dunn, an associate professor and director of the Cinema, Television, and Emerging Media Studies program at Morehouse College in Atlanta, Ga. “We need way more extensive programming that invites more directors of color, and more women in the room.”

And maybe someday, she says, we won’t have to count the number of minorities on our screens.

“What you want is a fundamental change in the minds of people who cast films, who make films,” Professor Dunn says. “We want to see that the fabric has changed, where we don’t have to talk about how there’s a white-out in Hollywood.”