' If I Was There, It Wouldn't Have Went Down Like That ': Bobby Brown Says Things Would Have Worked Out Differently For Bobbi Kristina If He Had Been With Her In The Days Before She Was Found Unconscious 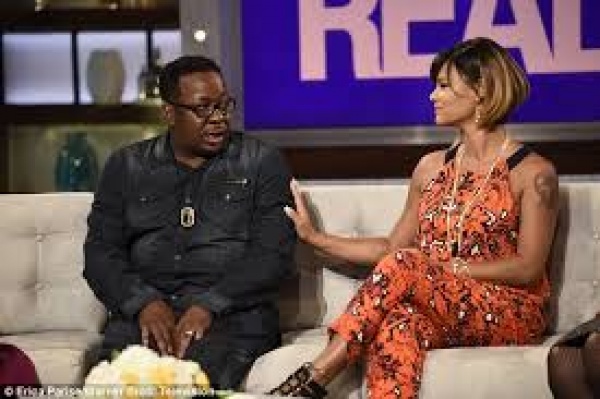 Date Posted: Monday, September 14th, 2015
Bobby Brown believes things would have worked out differently for Bobbi Kristina if he had been with her in the days leading up to her being found unconscious in the bath.

Speaking in his first interview since his daughter died, Brown said: 'If I could have been there two days before, it wouldn't have went down like that.'

Wearing a necklace bearing a photo of him and his daughter, Brown also told daytime talk show The Real that he comforts himself with the belief that ex-wife Whitney Houston 'called my daughter with her'.

In the interview, which airs later today, he says he and his family did all they could do for his daughter before her July death, six months after she was found unconscious in the bathtub of her Georgia home in mysterious circumstances.

'We prayed in hope for six months, you know, for something better to happen, but when god calls you he calls you,' Brown, supported by wife Alicia Etheredge Brown, says on the show.

Brown, 46, continued about Houston: 'She was not comfortable by herself, I guess, and she just called my daughter with her.'

On January 31, the 21-year-old Bobbi Kristina was found face down and unconscious in a bathtub in the Roswell home she shared with Nick Gordon.

She was rushed to hospital and spent six months in a coma and on life support, before being moved to Peachtree Christain Hospice, where she passed away on July 26.

What happened to Bobbi Kristina is still being investigated by authorities in Fulton County, Georgia.

A final autopsy report is yet to be handed down.

Bobbi Kristina's death was eerily similar to that of her famous mother, who was found dead in a bathtub in Los Angeles in 2012.

Earlier this week, lawyers for Nick Gordon denied allegations that he caused Bobbi Kristina's 'wrongful death' and says he tried to resuscitate her when she was unresponsive but was unsuccessful.

Gordon's lawyers filed a response on Tuesday to an amended complaint filed last month in a civil lawsuit that accuses him of assault, battery, causing emotional distress and stealing Bobby Kristina's money.

His attorneys hit back at the claims saying they were 'slanderous and meritless', according to People.

He denied allegations that he perpetrated the fraud that he had married her and used that misrepresentation to 'control' and 'limit' her interactions with others so that he could benefit from her wealth, People reported.

Gordon also denies physically abusing Brown, whose conservator Bedelia Hargrove, claims she had her tooth knocked out and was kicked in the side by her boyfriend.

The complaint alleges that Gordon fed Bobbi Kristina Brown a 'toxic cocktail' then placed her face-down in a tub of cold water on the last night she was seen conscious - which he denies.

According to Hargrove, police interviews with friend Max Lomas, who was at the townhome on the day of the January 31 incident, revealed that Gordon had been 'out all-night on a cocaine and drinking binge.'

He does admit that he went out on the night in question, and 'reviewed video footage and then had an argument with Ms. Brown and the he then changed clothes', according to People.