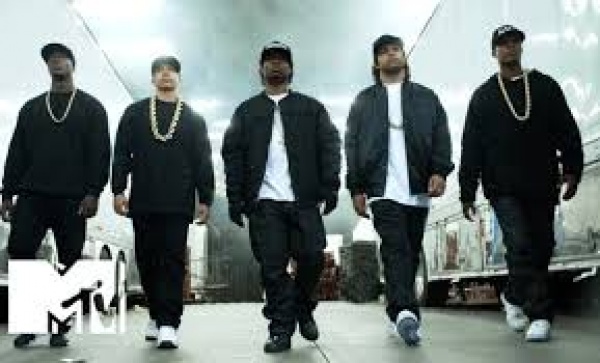 So it’s no wonder the ambitious and sprawling Straight Outta Compton plays a little fast and loose with details as it recounts the explosive rise, bitter break-up, and enduring impact of the seminal gangsta rap group behind incendiary 1988 anthems like “Gangsta Gangsta,” “Straight Outta Compton,” and “Fuck Tha Police.”

Ice Cube and Dr. Dre’s buddy F. Gary Gray (Friday, The Italian Job) directs the period biopic with an insider’s eye and a nose for emotional gut-punches that key into why the story of five young men from South Central rapping about police brutality and hood unrest in 1988 still resonates today, in an era of Trayvon Martins, Michael Browns, and Sandra Blands.

And Ice Cube, who jumped on an early version of the script back in 2009, is one of Straight Outta Compton’s six producers alongside Dre and Tomica Woods-Wright, Eazy-E’s surviving wife who’d inherited Ruthless Records from him after his death in 1995. Along with a soundtrack loaded with dozens of classic cuts from the dawn of West Coast rap, the film packs plenty of N.W.A. history into a script credited to Andrea Berloff, Jonathan Herman, Alan Wenkus, and S. Leigh Savidge.

But the attempt to lionize subjects Cube, Dre, MC Ren, DJ Yella, and the late Eazy-E while vilifying its antagonists—manager Jerry Heller, Death Row Records’ Suge Knight, cops, the press—tends to give the saga of the O.G. “reality” rappers a sheen of glossy Hollywood mythmaking. Even the players that lived through all the glory, strife, beatdowns, beefs, and brotherhood didn’t necessarily have the same memories of their shared history.

“There were things that I discovered making the movie,” Ice Cube recently told The Daily Beast. “I was discovering things about N.W.A. as I was making this movie, because [at the time] I was on my side of town going through what I was going through, and I didn’t necessarily know what they were going through until I started to interview them and research and rehearse.”

So what does Straight Outta Compton the movie get right (and romanticize) about gangsta rap’s O.G. crew?

1. IN THE MOVIE: Straight Outta Compton introduces its key players Andre Young (Dr. Dre), O’Shea Jackson (Ice Cube), and Eric Lynn Wright (Eazy-E) as South Central youngsters on their respective hustles—Dre a DJ scratching at a local club with buddy Antoine Carraby (DJ Yella), Cube a teenager writing rhymes on long bus rides to school from Compton to the Valley, Eazy slinging drugs while narrowly escaping brushes with the law. The formation of N.W.A., the film says, happens after Dre punches a guy who attacks his little brother one night. He’s arrested, Eazy bails him out of jail, and the rest is history.

IN REAL LIFE: According to recorded N.W.A. lore, Dre indeed landed in jail—but it was over unpaid tickets on his Mazda RX7. He paged Eazy to bail him out and to return the favor, agreed to produce a track for a record label Eazy wanted to start.

2. MOVIE: “Boyz-n-the-Hood,” the track that put Eazy-E on the map and started everything for Ruthless Records and N.W.A., almost didn’t happen: Ice Cube writes it for rap group H.B.O. (Home Boys Only), but the East Coasters balk at the lyrics and almost come to blows with Dre and his boys in the studio before Dre convinces Eazy to jump in the booth and give the track a stab.

REAL LIFE: New Yorkers H.B.O. recoiled at the song and walked out on the session, and into the annals of history’s forgotten MCs. Whether or not the scene went down as hilariously as in the film, which clowns them mercilessly and continues into a hilariously uncomfortable moment for non-lyricist Eazy, is unclear.

3. MOVIE: Eazy-E pacts with manager Jerry Heller after Heller hears “Boyz-n-the-Hood” and Heller pitches him on going into business together. They later form Ruthless Records and Heller lands N.W.A. a deal with Priority Records after a show in a roller rink.

REAL LIFE: In his 2007 memoir Ruthless, Heller (who was not involved with the film) remembers his meeting with Eazy going down way differently: It was Eazy who sought him out, not the other way around—and he even paid a mutual acquaintance $750 to make an introduction. The Priority deal went down the week after N.W.A. played a successful show at a local roller rink.

4. MOVIE: After signing with Priority, N.W.A. begins recording their landmark first album, Straight Outta Compton, in a Torrance, CA studio. One day they step outside, only to be brutally harassed by racist cops who hate rappers for looking like gangbangers as an outraged Heller looks on in shock.

REAL LIFE: The film conveniently dovetails this real-life incident with Dr. Dre’s personal family drama, but members of N.W.A. did get harassed by cops outside of Audio Achievements while recording Straight Outta Compton in 1987. Curiously, however, Arabian Prince—a part of the early incarnation of N.W.A. who worked on the album before slowly fading out of the group—has very little presence in the film.

5. MOVIE: At a packed 1989 show at Detroit’s Joe Louis Arena, N.W.A. is arrested for playing their controversial “Fuck The Police” onstage when uniformed and plainclothes cops descend from the crowd, chase the artists backstage, and handcuff them like folk hero outlaws in front of cheering fans.

REAL LIFE: The members of N.W.A. were hustled away from the arena by their security and whisked off to the safety of their hotel rooms—only to be arrested later when they snuck down to the lobby to meet girls, according to Heller. “Around midnight, after the police riot at Joe Louis had been quelled, those same Detroit undercover cops merely strolled into the lobby of N.W.A.’ s hotel. There they found and detained Eazy, Dre, Cube, Ren, and Yella—a clean sweep.”

6. MOVIE: An increasingly disgruntled Ice Cube finally quits N.W.A. after voicing his displeasure over his contract status with Heller and Eazy.

REAL LIFE: Heller claims the group voted Cube out at the end of their first tour because of his griping about proper compensation.

7. MOVIE: After leaving N.W.A., Ice Cube hits back at his ex-group’s insults by issuing “No Vaseline,” one of the greatest diss tracks of all-time. The beef leads to a violent altercation when Ruthless Records artists jump Cube and his Da Lench Mob crew at the New Music Seminar.

REAL LIFE: “There’s never been a good rapper from the sixty freeway,” Cube supposedly snarked after leaving N.W.A., igniting a violent feud with members of rap group Above the Law.

8. MOVIE: In one of N.W.A.’s most notorious interpersonal clashes, Eazy is called to meet with Dre, who wants out of his Ruthless contract so he can pact with Suge Knight’s Death Row Records. But it’s a set-up: Eazy walks into a mafia-like ambush where Knight and his goons beat him up to get him to release Dre from the label.

REAL LIFE: Dre has denied knowing of Knight’s plans that night in 1991. In his book, Heller corroborates the movie’s assertion that Eazy-E wanted to retaliate by killing Knight. He also claims that Knight wanted three Ruthless artists—Dre, D.O.C., and Dre’s girlfriend Michel’le (whom Knight later married)—released from their contracts so they could sign with Knight and Sony. A lawsuit against Dre, Knight, and Sony was later settled out of court.

9. MOVIE: Dre witnesses Knight and his gangbanger buddies intimidating a man in his underwear with a dog in the Death Row Records offices—then leaves in protest and leads cops on a dramatic high-speed chase that ends with his arrest.

REAL LIFE: Dre told The Hollywood Reporter that the scene really happened: “I was like, ‘What the f— is going on?’ I was ready to leave anyways. This was the extra push. The guy in the underwear—all this###actually happened.” As for the arrest, Dre was sentenced to eight months in prison for drunk driving his Ferrari through Beverly Hills in the late night, 90 mph chase. Meanwhile, conspicuously absent from Straight Outta Compton is any attention paid to Dr. Dre’s most famous and controversial case: His violent assault of MTV personality Dee Barnes. An ensuing $22 million lawsuit was later settled out of court, and Dre unapologetically immortalized the attack in his single “Guilty Conscience.”

10. MOVIE: After being diagnosed with AIDS and hospitalized, Eazy is visited by former bandmate Dr. Dre. Ice Cube arrives to see him too, but can’t bring himself to enter Eazy’s room.

REAL LIFE: DJ Yella, who along with MC Ren was a consultant on the film, remained close to Eazy throughout the post-N.W.A. breakup beefing that saw Cube, Eazy, and Dre slinging insult tracks at one another. Yella was also the only member of N.W.A. to attend Eazy’s funeral.

Speaking to journalists this weekend in Beverly Hills, Straight Outta Compton producer Ice Cube acknowledged that the film is an expression of what N.W.A. lived through. “The record is real life moving at the speed of real life; this is a movie that looks back and is a piece of art,” he said.

“And if you don’t like the movie,” he joked, “you can kill yourself.”