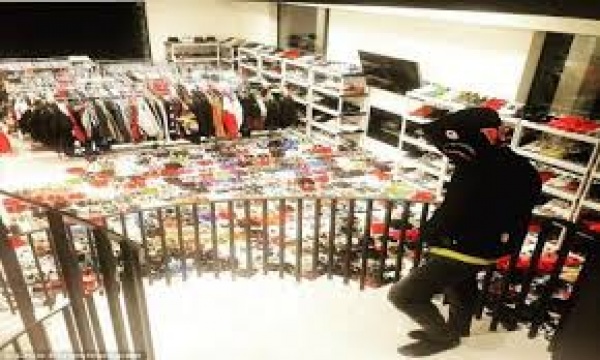 His house was broken into less than one week ago.

But, as the days unfold, new developments continue to emerge for singer Chris Brown, who's property was ransacked while he was busy making an appearance at a Los Angeles nightclub.

Now, according to a report on TMZ, the 26 year-old believes the perpetrators were four of his best friends who committed the ultimate betrayal for financial gain, including holding his aunt hostage.

The site claims that both law enforcement and the smash-hit performer assume that the burglars were very close to the star.

As investigations continue, police also believe that a club promoter was involved - not least because they knew he'd been paid $50,000 in cash for an appearance, which was hidden in his safe.

TMZ also add that police believe local gang Bloods may be involved and that 'a member of LAPD's Gang Unit was assigned the case.'

The latest update comes just days after claims Chris was tailed ahead of the incident - meaning he was actively monitored by the criminals who waited until he was busy with a public appearance before striking.

The masked men are said to have forced their way into his 26-year-old singer's Los Angeles home at 2am on Wednesday 15 July, before holding his aunt hostage and then ransacking the place for valuables.

Officer Liliana Preciado told the media: 'The suspects got away with an unknown amount of cash, electronics and personal items.'

Brown's mother, Joyce Hawkins, believes the incident was an inside job, according to TMZ.

Sources told the site she has been warning him for years about people she calls 'no good-ass friends'. Hours after the home invasion ... Joyce tweeted, 'Watch who you standing beside.'

Detectives have been canvassing the neighborhood around the gated property at the end of a secluded street in the San Fernando Valley and looking for surveillance camera footage.

'We're trying to see if there's any video evidence that might have picked up the suspects,' Lt. Kirk Kelley told reporters at the scene.

Investigators have not released descriptions of the suspects, who were armed with handguns and wore bandanna's around their faces, police said.

Brown came to the home several hours later to check on his aunt and then left, Preciado said. Thankfully she was not hurt.

TMZ also reports law enforcement sources believe the whoever planned the break-in was someone Chris knew, who was privy to the singer having been paid $50,000 in cash for a club appearance.

The incident was thought to have occurred as Chris flaunted his sculpted abs and extensive collection of tattoos as he left the Argyle club in Hollywood.

Rihanna's ex, was seen leaving the venue in a red varsity jacket that he wore open to reveal his naked torso and chest.

The Don't Judge Me singer looked calm and relaxed as he left the Hollywood hotspot in a body-bearing ensemble.

Wearing a red varsity jacket with a 'B' for Brown - emblazoned upon it open and unzipped, Chris flaunted his abdominal muscles and ever-growing collection of tattoos.

This is not the first time the singer has been the victim of a home invasion, in May, Chris returned home to find a naked woman inside his home.