UPDATE: Suge Knight Claims He Has A Video Proving An 'Attacker' Was 'Holding A Gun' Just Moments Before He Allegedly Ran Over And Killed A Man 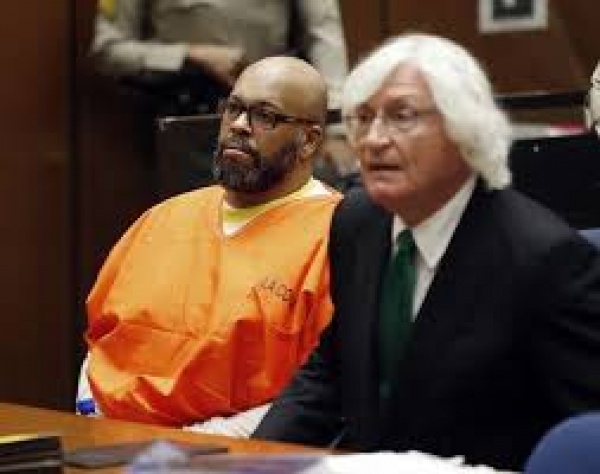 Suge' Knight plans to produce a video showing an attacker brandished a gun just before the fatal incident, his attorney said in court papers.

The rap mogul, who is charged with murder for running over a man at a California hamburger stand earlier this year, hopes it will show he was 'viciously attacked' moments before the fatal incident and knocked down two men while 'fleeing for his life'.

Attorney Tom Mesereau gave few details on the video in a motion submitted on Wednesday in Los Angeles Superior Court, including how it was shot and how Knight obtained it.

Knight, 50, is charged with murder, attempted murder and two counts of felony hit-and-run in connection with a Jan. 29 confrontation in the parking lot of a hamburger stand that left one man dead.

Prosecutor Cynthia Barnes has said in court that the Death Row Records co-founder traded punches with sometime actor Cle 'Bone' Sloan through the window of his pickup truck at the hamburger stand in the Los Angeles suburb of Compton, before putting the vehicle into reverse and knocking over Sloan.

Knight then drove forward to strike Sloan with the vehicle and ran over 55-year-old Terry Carter, who later died, Barnes said.

But Mesereau in his latest court papers, citing a video of the confrontation that he said Knight would submit as evidence, described his client as having been 'viciously attacked' and fleeing for his life.

'Most significantly, the video discloses one of his attackers brandishing a weapon. When this armed attacker dropped his gun, the video depicts an associate retrieving the weapon and placing it in his waistband,' Mesereau wrote in the court papers.

Knight, who is held on bail of $10 million, has pleaded not guilty.

On Tuesday, a Los Angeles judge declined a request from Knight's attorneys to dismiss the charges on grounds that Sloan declined under oath at a hearing this year to identify Knight as the driver of the truck.

Representatives for the Los Angeles District Attorney's Office did not immediately respond to emails requesting comment, nor could Mesereau be reached for additional comment.

Mesereau, who successfully defended the late Michael Jackson against child molestation charges a decade ago, also asked the judge in court papers to reduce Knight's bail, arguing his client has diabetes and hypertension and is partially blind.

Knight, who is due in court on July 17, faces a mandatory sentence of 25 years to life if convicted of murder.

He also faces charges of robbery and making threats in a separate case involving a 2014 confrontation with a photographer.